Guelph, Ontario. Dec. 14, 2018. United Way Guelph Wellington Dufferin has met its fundraising goal, raising an outstanding $3,601,549. The announcement came on Friday at the campaign closing and volunteer appreciation event, where over 200 members of the community came together to celebrate their part in the organization’s annual fundraising campaign.

“Once again our community has shown incredible kindness and generosity,” said Ken Dardano, executive director of United Way. “United Way programs impact everyone from children to seniors and we are incredibly lucky to have the support of so many that believe in giving back and supporting some of our community’s most vulnerable.”

Funds raised during the campaign support a network of more than 50 agencies and 75 social service programs across Guelph, Wellington county and Dufferin county, that help thousands of people when and where they need it most. The Campaign is fiercely local; all money raised here, stays right here in our local community, with funded programs supporting an estimated 85,000 people every year.

“It’s an honour for me to serve as the Chair of our community’s largest social service fundraising campaign. Linamar is very proud of our longstanding relationship with United Way”, said Jim Jarrell, President and COO of Linamar Corporation and the 2018 United Way Campaign Chair. “A special thanks to all of the corporations, local businesses, volunteers and community partners who supported the Campaign this year and did their part to support our local community.”

At the closing event on Friday, Linamar Corporation , the University of Guelph, Sleeman Breweries and the City of Guelph, took home the awards for Campaign of the Year. Linamar was also awarded the Overall Achievement award, raising $869,000 company-wide. The Co-operators and OMAFRA were also among those recognized with United Way awards.

The $3.6 million total announced today is based on received and pledged dollars, with some workplaces continuing campaigns through to the new year. More than 200 workplaces took part in the campaign, and more than 7,500 donors contribute to United Way annually.

United Way Guelph Wellington Dufferin has worked in our community for over 75 years to monitor and meet the pressing social needs of our community. Directed by a volunteer board, managed by committed staff and supported by thousands of donors, United Way works with partners in all sectors to improve lives and build community. 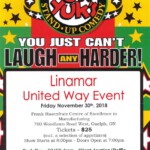 Nominations open for the 2019 Winegard Awards