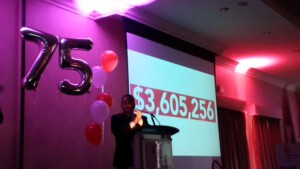 Guelph, Ontario. Dec. 17, 2015. The Guelph-Wellington-Dufferin community has shown its generous spirit once again, raising an outstanding $3,605,256 toward the annual United Way fundraising campaign. The announcement came on Thursday at the campaign closing and volunteer appreciation event, where over 200 members of the community came together to celebrate their part in the organization’s record-breaking fundraising campaign.

“Once again our community has shown incredible kindness and generosity,” said Karen Farbridge, United Way campaign chair. “Thanks to incredible corporate partners and donors, thousands of people will be impacted by the money that can now be invested in the community, and that is a wonderful thing.”

“This year has been a roller coaster and really came down to the wire, but the way the community rallied to make this happen has been inspiring”, said Ken Dardano, executive director of United Way. “75 years ago, the local United Way campaign raised $70,000. It is a great feeling to know that as we come to the end of our 75th year, we are able to continue to invest in local programs and keep our community strong.”

At the closing event on Thursday, McNeil Consumer Healthcare and the University of Guelph took home the award for Campaign of the Year (Private & Public sector respectively). Linamar Corporation & the University of Guelph tied to take home the award for Outstanding Overall Achievement, each raising $625,000. Sleeman Breweries Ltd., Cargill Canada, The Co-operators, OMAFRA and the County of Wellington were also among those recognized with United Way awards.